8.1 What are the Three Laws of Tomatis?

Topic Progress:
← Back to Lesson

He found that by retraining the ear to hear certain sounds, they would spontaneously re-appear in the vocal range.

By retraining the ear consistently with an ongoing program of sound therapy, he was able to make a permanent correction of frequency restoration.

How Tomatis developed his three laws of listening

Through Tomatis’ work with singers, the moment where a light went on for him, was his first key discovery that “the voice contains only those sounds that the ear can hear.”

This became known as “the First Law of Tomatis”, after it was tested and verified at the Sorbonne University in Paris.

Tomatis had established in his clinic that if a subject emits a vowel into a microphone, and the sound is then passed through a series of filters which would suppress particular frequency bands before being fed back to the subjects ears, those sounds that had been removed from the sound signal were then also emitted from the spectrum of vowels being produced by the person’s voice. Similarly, he found that for those who presented with a hearing loss, when he measured their voices they proved to be deficient in the same harmonics that were missing from their hearing.

Through these discoveries Tomatis developed his “Electronic Ear,” the device that is the keystone of Tomatis Sound Therapy filtering. After treating his subjects through a series of amplifiers and filters, Tomatis automated this process with the Electronic Ear in order to streamline the procedure.

The next question Tomatis explored was how could this change be made permanent?

Through further experimentation, he found that with a regular course of treatment using the Electronic Ear, the lost frequencies were restored permanently to the voice. In this stage of experimentation, Tomatis found that he could recondition the ear by having the person listen to their own voice conditioned to contain a greater frequency range and quality. He introduced greater audio-vocal control using a microphone so that the singers were hearing their own voice directly modified through the filters he had set up. After a certain period of treatment in this manner, he found that the changes were maintained.

Tomatis coined the term “audio-phonology” which means to hear oneself speak, and listen to oneself. In Tomatis’ view, the ear is the main organ of control for our language—all of our outwardly directed information.

Tomatis said “a good utterance demands not only a good auditory receptivity but a good self listening”. He suggested that self listening was the key to  being a good singer, and that the greater self control a person had over their voice, the better quality they could produce.

Tomatis revealed to us the neural circuitry of our audio-vocal linkages. Because the muscles of hearing and speech are innervated by the same cranial nerves, the integration of this system can be seen in our physiology.

The cranial nerves innervating this system are:

The voice contains only those sounds that the ear can hear

Mouse over the segments to learn about each element

The cranial nerves innervating this system are: 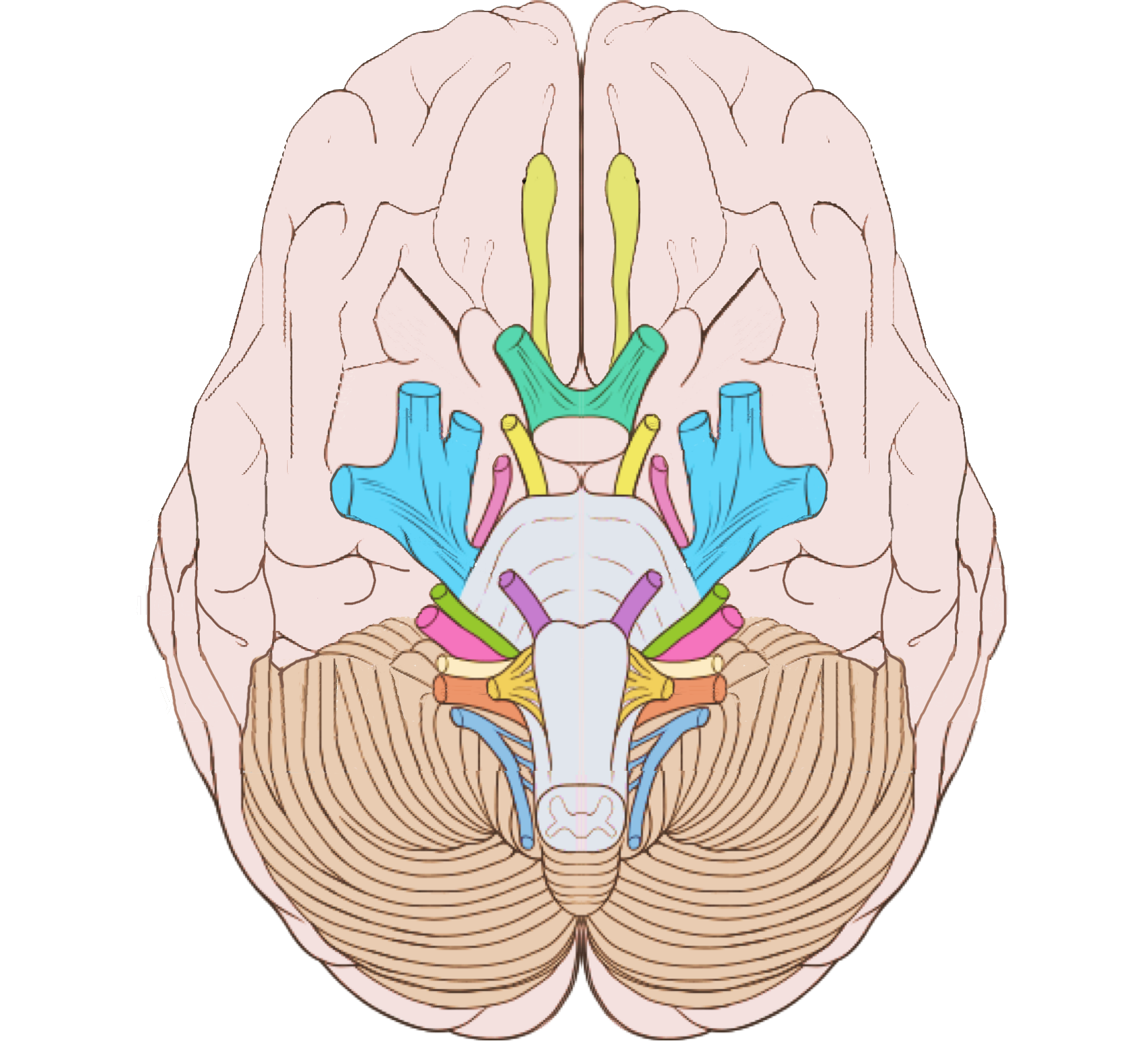 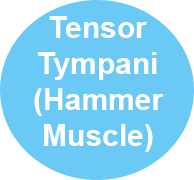 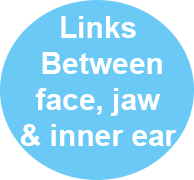 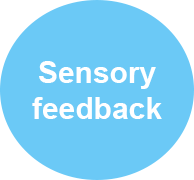 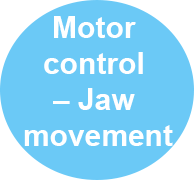 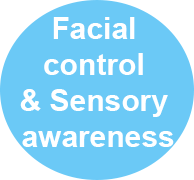 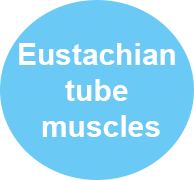 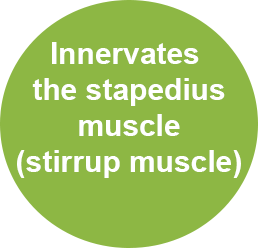 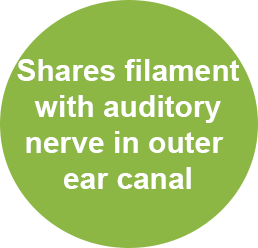 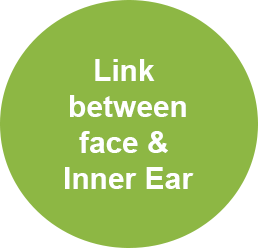 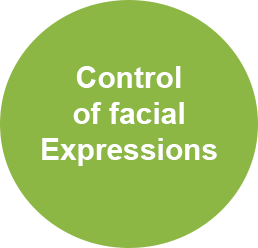 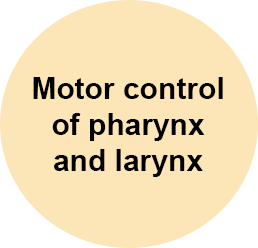 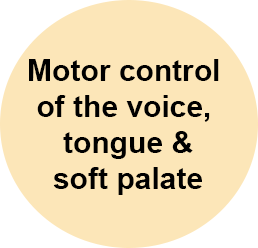 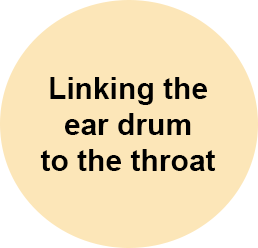 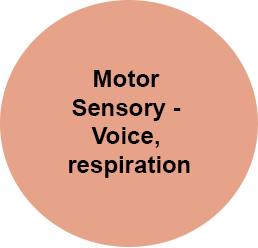 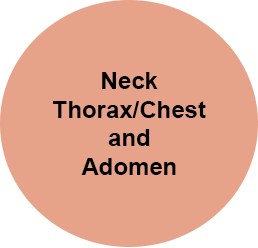 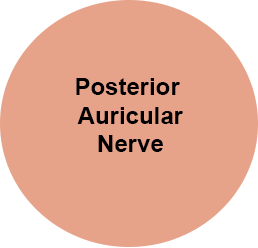 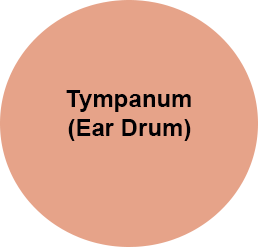 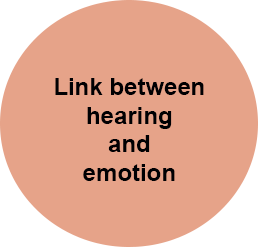 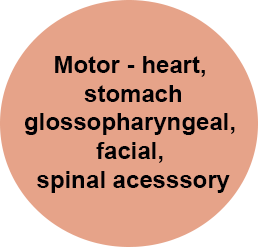 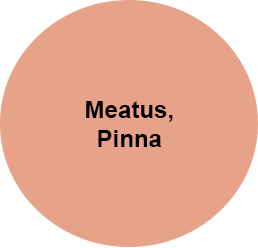 Tomatis taught us about the key role of the two middle ear muscles in our audio vocal control. He showed how by retraining these muscles we can become an active listener, able to scan the auditory field and focus intentionally on sound. Thus, his Sound Therapy program trains the person to be an active listener able to monitor their own voice at a sophisticated level and to scan and select the sounds of interested from a complex field of sound. 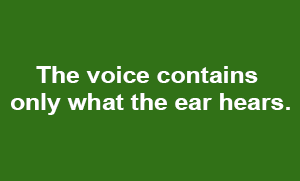 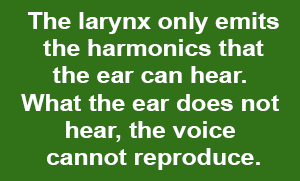 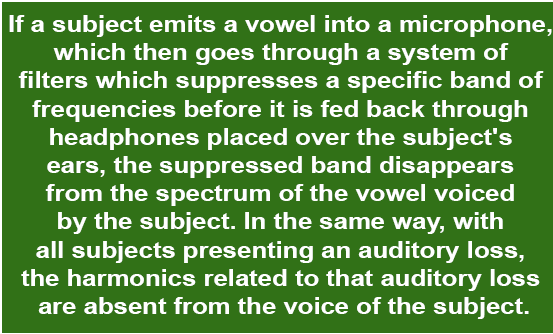 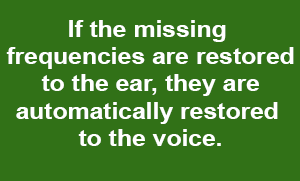 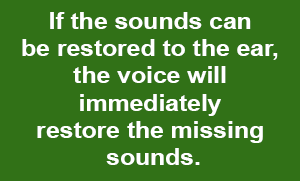 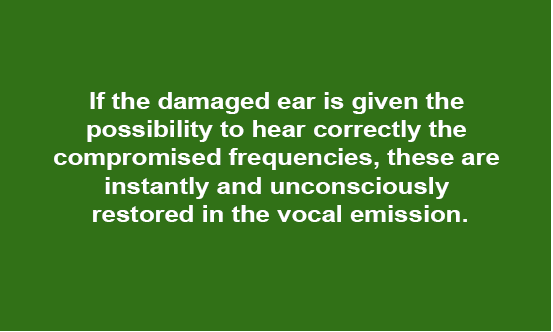 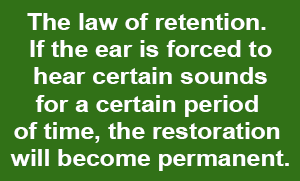 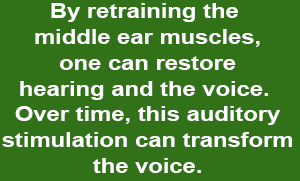 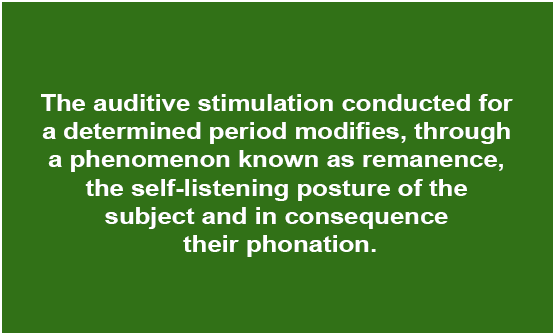 The Three Laws of Tomatis

First Law: The voice contains only those sounds that the ear can hear.

Second law: if the ear is forced to hear certain sounds, it re-gains the ability to hear them.

Third law: If the ear is forced to hear certain sounds for a certain period of time, the ability to hear them becomes permanent.

Explanation of the three laws

How Tomatis researched his laws

Through experimenting with singers in his clinic, Tomatis observed the reciprocal relationship between the ear and the voice. He found that when he could restore missing frequencies to the ear, they were automatically restored to the voice. He then had his discoveries tested at the Sorbonne University, where they were proven to be true.