Topic Progress:
← Back to Lesson

The process of removing certain frequencies from the music, according to certain patterns designed for retraining the ear.

Filtering sound means the process of removing certain frequencies. In the Sound Therapy program the low sounds are gradually filtered out so that only the high sounds remain. Sounds above 8,000 Hz are recharging for the brain and these sounds are gradually augmented through the listening programs. On album number four in the Listening Foundation program, and in our advanced levels, there is a high concentration of sounds which are above 8,000Hz.

In the Natural Hearing Improvement series, the filtering is gradually increased throughout to retrain the ear. Each album and each level has a greater concentration of high frequencies than the one before it. In this way the ear is taken through a gymnastic process of gradually building its resilience.

In the Emotional Intelligence series, a different pattern is used in the filtering so that the focus extends more to opening the heart and integrating the limbic system. There is a greater variety of low sounds and high sounds to involve our different emotional responses.

Why do we use analogue sound processing?

Because analogue sound waves have a smooth, natural shape which is gentle on the ear.

Analogue sound has advantages as a form of sound recording because the signal remains intact as a smooth, flowing wave.

Once it is broken down in to a numeric, digital signal, it is easy to lose the value and integrity of the sound. Unless a very high quality format is used, errors and omissions will affect the high frequency integrity and therapeutic value of the sound.

All our source music, filtering and activation is done on analogue equipment. The final process is the transfer to a high quality digital medium, done with great audio precision using the best available analogue to digital converters.

This ensures that the therapeutic quality of analogue sound is retained, as long as the original Sound Therapy album is used.

The music must never be copied or downloaded to another format as this may detrimentally affect the therapeutic result.

Why must you use headphones?

Because high frequency sounds to not traverse distance well so must go directly into the ear, and in order to get the right ear emphasis.

There are two reasons that headphones must always be used for Sound Therapy. One is that the high frequency sounds are so subtle that unless they are played directly into the ear they would not reach the ear at all. The other is that training for right ear dominance is achieved by having more sound go into the right ear.

Initially some people may ask if they can play Sound Therapy through speakers and still get a benefit. Generally the answer to this is no.

First of all, there is no reason to do this. Anyone can wear headphones, even a newborn or a person in a coma. Because high frequency sound waves are very tiny, a tiny fraction of a millimetre, the greater distance of a speaker

will significantly reduce the high frequencies reaching the ear. It is also difficult to ensure the right ear emphasis using speakers. It could be done when the person is in bed, but if they roll over, they will be reversed!

It may also be difficult for the small players we use to drive a speaker and produce quality sound, so a preamp may be needed.

Despite this, some people will still prefer to set up speakers for their baby and accept that there may be less benefit. There will certainly still be some benefit, as even normal classical music is beneficial, so there is no harm in this, if they are uncomfortable putting headphones on the baby.

What does the Electronic Ear do?

It causes the tones to fluctuate between different patterns of high and low sound in order to exercise the middle ear muscles.

The Electronic Ear is like a replica of the natural ear. By setting its different filter levels, it enables us to select and augment certain frequencies.

The albums are programmed in such a way as to train the ear progressively towards the high frequencies. The music is divided between two channels, each of which have different settings for base and treble filtering.

It alternates between the two channels and each time it switches to the high channel the volume is boosted so there is an emphasis on the high sounds.

This says to the ear “these sounds are important” and so causes the ear to sit up and pay attention to the high frequencies, which progressively increase throughout the program.

The degree of emphasis on high versus low sounds and the different range of these sounds is gradually altered through each Sound Therapy program. This enables us to create a progressive exercise regime which gradually puts the ear through its paces and increases its resilience.

The Electronic Ear Talks to the Brain.

Natural sounds relate to the archaic consciousness of the human being. The development of the human ear is sophisticated because hearing is a matter of life or

death. Hearing was the most important sense for our survival because we can hear what is unseen. We can hear in the dark.

Sound Therapy alters sound so that it carries a non verbal or musical message to the brain to say “perk up and listen because this in interesting.” The Electronic Ear, used to process the sound, duplicates the frequencies which cause recognition and understanding.

The Electronic Ear works in the same way as the brain. It identifies which information is important. Where the person has shut down somewhere in the auditory cycle and is no longer doing this, the Electronic Ear helps to re-awaken this capacity.

What has been done to the music?

It has been processed with the sound therapy filtering algorithms so that it becomes an intensive workout, stimulating the ears and brain.

Three processes are used in the Sound Therapy filtering.

1) The Electronic Ear causes the music to fluctuate between the high channel and the low channel according to specific algorithms used for each album.

2) The filtering gradually removes the low frequencies from the music.

As sound goes through the Electronic Ear it is divided between two channels – the high channel emphasises the high tones and the low channel the low tones. An interdependence between pitch and volume (frequency and loudness) causes the device to switch from the low to the high channel. The emphasis on important information is therefore magnified.

The machine on its own, however, is not sensitive enough to pick up the subtle nuances of which parts of the music are important. For instance, in a quiet passage, it may fail to make the switch because there is not enough intensity of sound. The only way to overcome this would be to have the therapist sit and manually adjust the device throughout the treatment. The sensitivity and musical appreciation required mean that a machine could not do the job. It would require a person with great skill, sensitivity and patience.

This has been done on the Joudry programs as each master album was made by Patricia or Rafaele Joudry working manually with the Electronic Ear throughout the recording. This level of detailed manual input could not be achieved in one on one clinical treatment unless the therapist were to sit through every treatment and manually operate the equipment.

Mouse over the segments to learn about each element 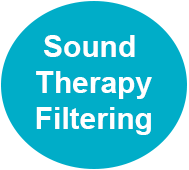 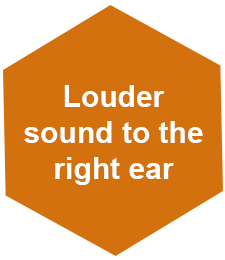 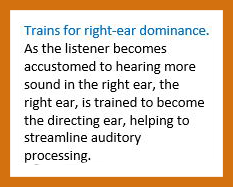 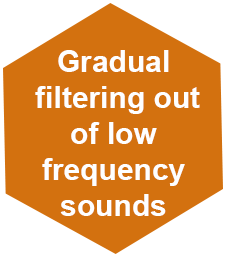 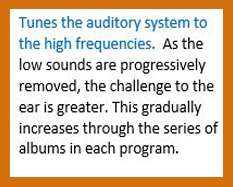 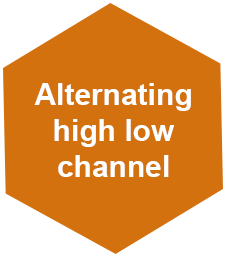 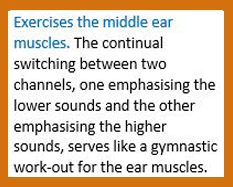